Have you always wanted to experience what it feels like to leave your name, tag or initials on a wall, train or metro with an aerosol? Through our virtual graffiti wall this is now possible without fear of a fine, dirty clothes or wild chases. We have developed a graffiti simulator that can be used as a side entertainment or open walk-in activity to entertain visitors during events, fairs, company parties and training days in a creative and original way. You can spray virtual graffiti without paint splatters or paint mist under the guidance of real graffiti artists with our VR graffiti simulator.

After putting on the VR glasses and grasping the controllers, your virtual graffiti experience starts. It is not sprayed with real paint, but with a virtual spray can in a virtual environment. You forget after a few seconds that the experience is not 'real' because the graffiti simulator is so lifelike that it looks like you're really spraying your name on a freight train, rooftop in the Bronx or in the subway tunnels of New York. Naturally, this unique experience is accompanied by our experienced graffiti artists and VR experts.

How does the VR graffiti simulator work?

The user-friendly interface of the virtual graffiti, also abbreviated VR graffiti called, application offers a wide choice in number of environments. Think, for example, of walls at different locations, a shunting yard or an abandoned metro station. You have 2 controllers, 1 of which acts as an aerosol. The other control works as a menu with which you can switch between the environments, save your creation and where you can set the operation of the spray can. For example, it is possible to choose colors, set line widths and transparency or choose from the different types of caps. You can also save the artwork you have made so that we can send it digitally later.

De VR graffiti simulator works, as the name suggests, based on Virtual Reality. In contrast to Augmented Reality where objects are animated or visualized in the real world by means of an application, Virtual Reality takes place in a virtual world that is only visible when you have a VR headset on. For our VR sets, we use HTC Vive Pro headsets in combination with Nvidia GeForce RTX 2070 video cards.

View the practical information and frequently asked questions about our VR graffiti simulator.

We provide our VR graffiti simulator at any location in the Benelux or beyond.

The created graffiti artworks are digitally stored and sent to you by e-mail.

The graffiti simulator requires an empty ground surface of approximately 5 × 5m with a minimum height of 2,5m.

The VR graffiti simulator itself cannot be customized, but we can place a banner frame on it.

The VR graffiti simulator can be used seven days a week at a time of your choice.

The VR graffiti simulator can only be used indoors in areas where it is not too light.

We provide all materials, the only thing that we need on site is a normal power point.

Ask? We are happy to give advice 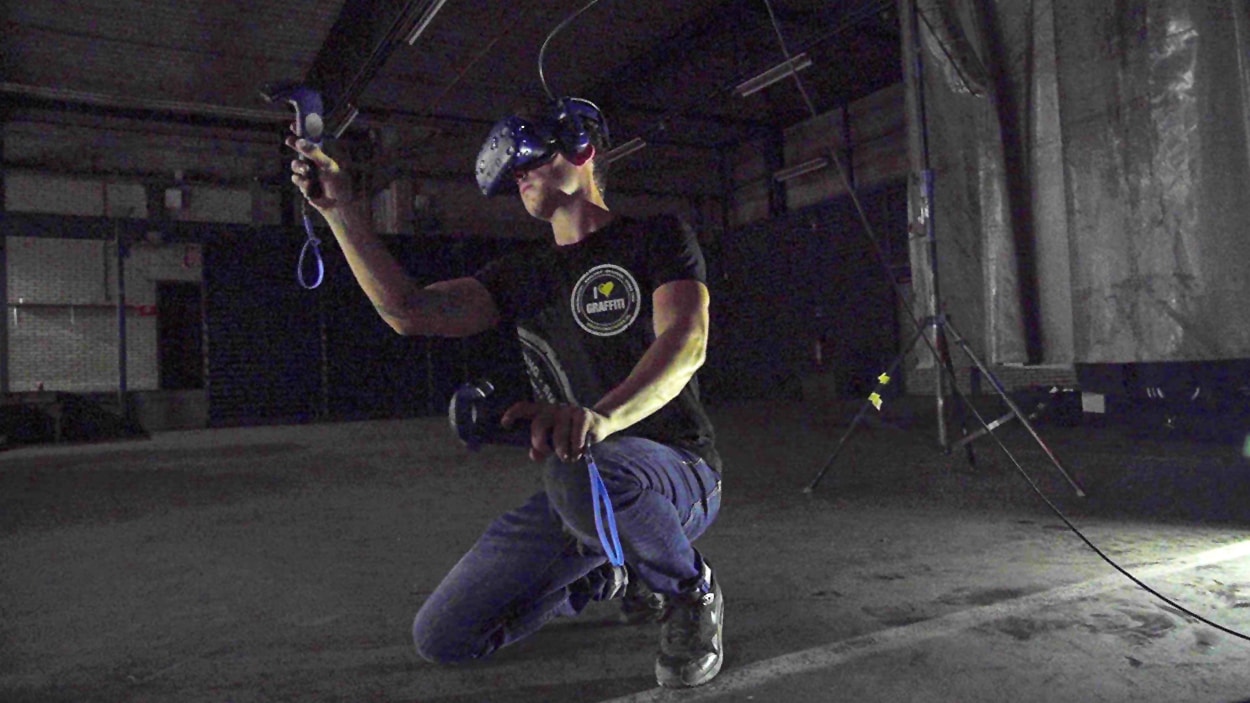 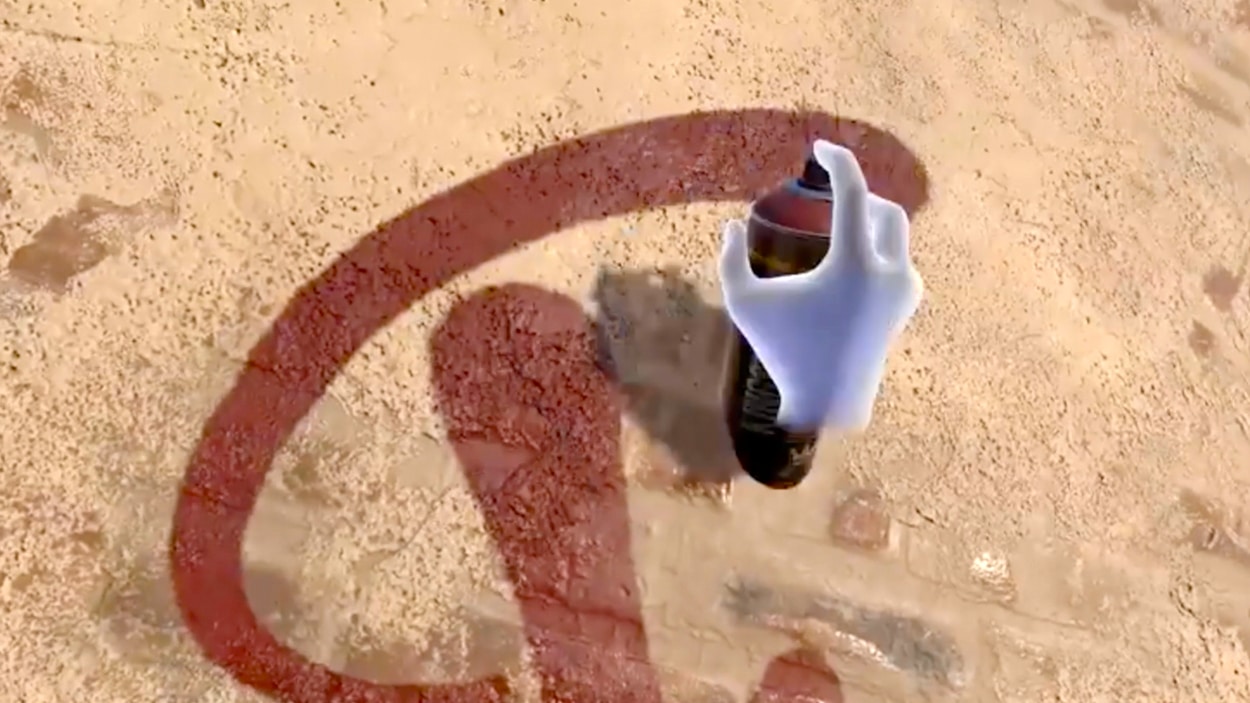 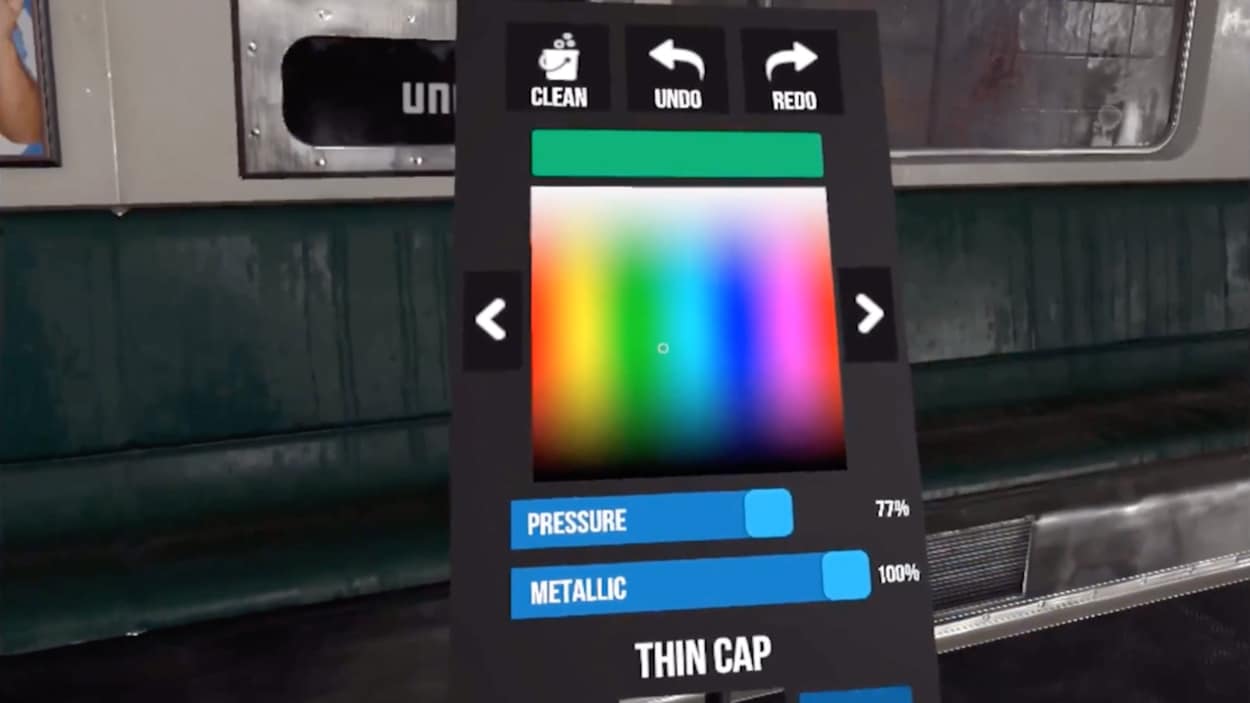 The menu of the VR graffiti application.

We use, with permission from Infectious Ape, the most recent version of the program Kingspray Graffiti VR. Kingspray is the most sophisticated virtual graffiti application making it a cool and challenging program to use even for experienced graffiti artists. The distance to the object is taken into account, so that the line becomes thinner and drips faster if you keep the virtual aerosol close by and the paint atomizes more when the aerosol is held further away from the work surface. You can choose from different types of caps, where the pressure of the virtual aerosol can is also adjustable. Of course it is also possible to use other virtual drawing programs on our VR set, such as Google Tilt Brush, in addition to the Kingspray graffiti application.

In addition to our Virtual Reality graffiti simulator, we also offer a digital graffiti wall. This one digital graffiti wall has been developed by us to entertain visitors of company parties, events, fairs and congresses in a creative and original way. Special aerosol cans are used that emit invisible infrared light that communicates with the technology behind the projection screen. So there is no paint mist or paint smell. The created creations can also be printed, sent by e-mail or shared on social media. The graffiti wall is used by us throughout Europe and can be fully customized to match your brand or event.

A selection of customer reviews and experiences with our company, team and services.

View all our workshops

We provide creative workshops and activities, view our complete range.